Over the weekend, our wonderful Rowdawgs traveled to Oak Ridge, TN once again to participate in the Secret City Head Race. It was an exciting return for our varsity rowers who had been on the race course before and a new experience for the novice as they participated in their first head race and really learned what rowing is all about.

The team learned a lot about race day and is ready to set our sites on the next regatta and work hard over these next two weeks.

Wednesday’s practice saw four of Butler’s rowers pulling a 2k and one rower pulling a 6k, their first tests of the season.

While Kappeler rowed her 6k, novice Nick Williams warmed up for and pulled his first 2k test as an official member of the Butler Rowing team. Williams set his first, and best, time at 8:14.8 with an average 500m split of 2:03.7.

Congratulations to all of our RowDawgs who rowed their hearts out on the ergs!

The Butler Rowing Team is seeking talented Butler students with knowledge of photography and video production to join our close-knit team in an effort to publish professional photos and videos that really captures our team spirit and what our sport is about.

The positions will be unpaid, but we hope to offer valuable experience. Attendance at every practice is not required, but we would like the interns to be present at a minimum of one practice a week. Attendance at regattas would also be appreciated, but not mandatory.

Inquiries can be made to the team’s president, Caitlin Ladd at crewclub@butler.edu.

The first ever Butler Rowing Row-A-Thon was an incredible success that blew away everyone’s expectations. After months of planning and prep work put in by the club’s officers and the club’s Coach, the 2016-2017 team became the first rowing team from Butler to ever break a world record. The record was for the longest continual erg time by a small, mixed team of men and women under the age of 30.

The previous record was held by the Wells Tobias Rowing Challenge Team of Reading, United Kingdom and was 25 hours long. Butler Rowing not only broke the 25-hour record, the group of eight rowers went on to row another 5 hours for a total of 30 hours. The necessary paperwork has been sent to the coordinators from Concept2 and the team is currently waiting for confirmation that the record will be accepted.

The world record attempt also doubled as a fundraiser for the club as well as the Semper Fi Fund which provides financial assistance and lifetime support to post-9/11 U.S. veterans of all branches of the Armed Forces. The fundraising goal the team set to achieve was $2,000. About four hours before the start of the Row-A-Thon, several generous donations were made that allowed the team to meet and surpass their fundraising goal. Over the course of the Row-A-Thon cash and online donations brought the total up to $2,889.89.

Despite some minor technical difficulties with the livestream and an overall lack of sleep, the experience was a good team bonding activity that brought so many people together in support of an important cause, especially with the 15th anniversary of 9/11 the day after the Row-A-Thon. Pizza was eaten, cupcakes were passed around, Yats was brought in, and everyone manged to get through their hour-long shifts without crying (mostly).

Coverage was posted on the team’s Facebook, Twitter and Instagram. WISH-TV also stopped by and published a story on the team’s efforts that can be read here.

Moving forward this week, the team is ready to welcome a few more novice and focus on improving on the water. With the planning and preparation for the Row-A-Thon over, the team next turns to regatta season where they intend to travel to Secret City on October 22 and participate in a regatta that will be held at Eagle Creek on November 5.

On Friday night, the Rowing team was happy to have our annual call-out meeting at the beginning of the semester. We welcomed a handful of interested students and taught them more about what rowing is all about and how to take a stroke on an erg (rowing machine). 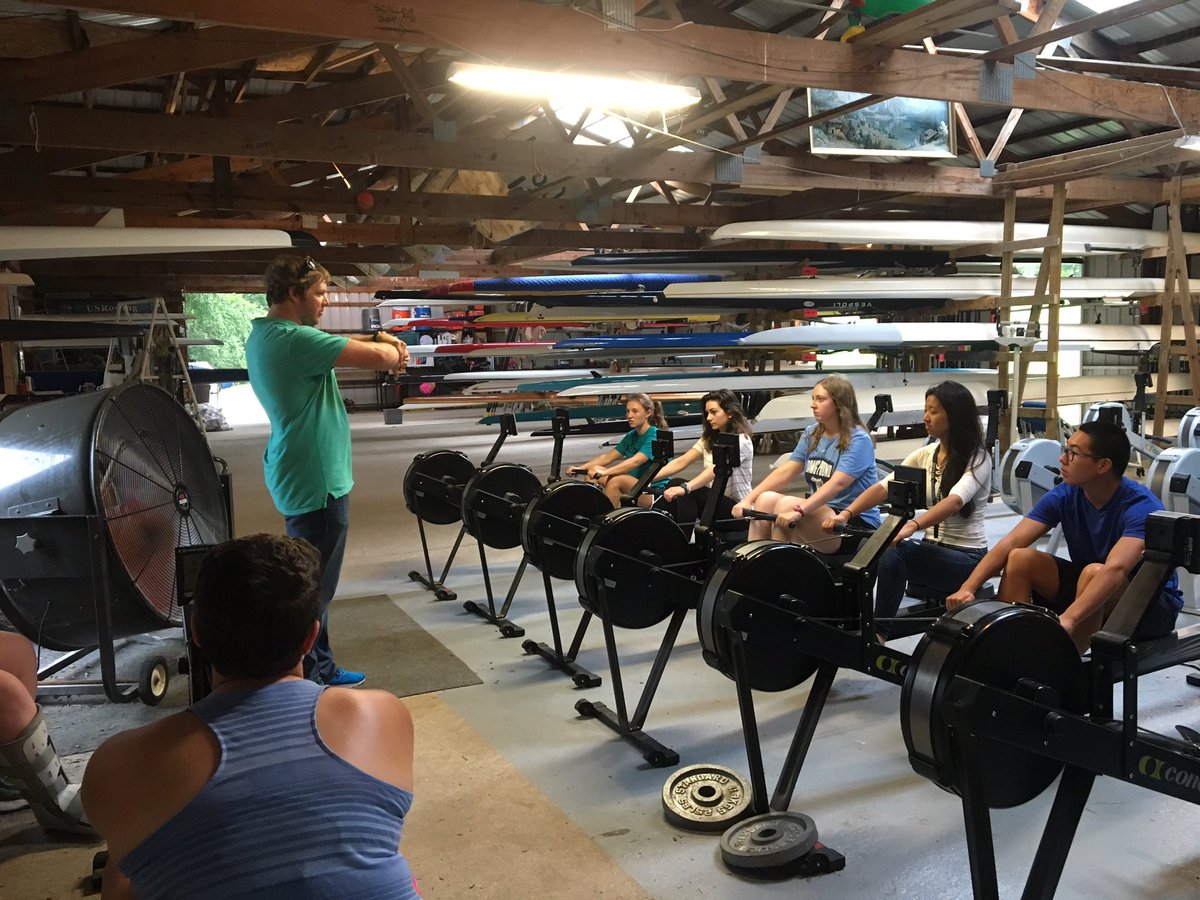 Coach Stephen Eckstein can be seen here explaining the proper motions to our novice as varsity member Maggie Jensen demonstrates the motions in front of them.

Despite the stormy weather and the rain that’s been relentlessly hitting Indianapolis the past few days, our varsity members still got some work in as they teamed up with the novice for a short 1000 meter relay. The novice and varsity pair took turns erging every 250 meters. 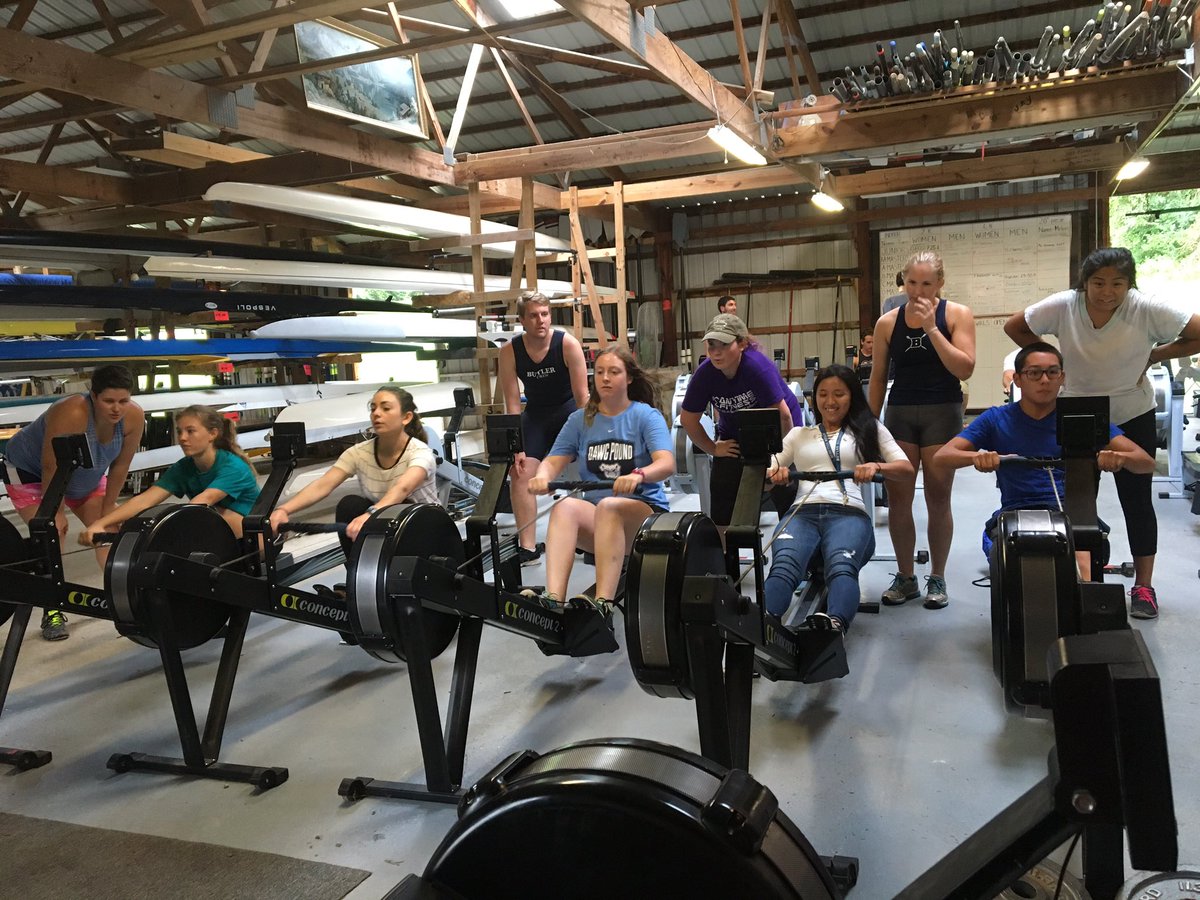 Interested members who missed the call-out meeting on Friday and would like to come out to the boathouse and learn more about the sport are more than welcome to come out on Monday for our first practice of the week. Students are asked to wear athletic clothes and meet in front of the HRC at 5:30pm in order to organize carpool groups.