The Butler Curling Club plays with the Circle City Curling Club in Fishers, IN at the Fuel Tank.  We play the curling teams from Purdue University, University of Indianapolis, and Carmel High School from 9:30-11:30 PM on Fridays.  We also plan on attending various bonspiel tournaments across the country throughout the year as well.  No experience is necessary to join!

Each week, we play 4 vs. 4.  On each team of four is one skip, one thrower, and two sweepers.  All four members take turns sweeping, throwing, and skipping each game. 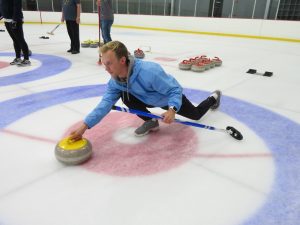 The thrower is the one who actually delivers the stone down the ice. 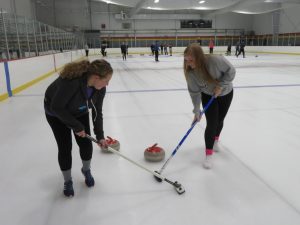 The two sweepers sweep the ice in front of the stone to influence the trajectory of the stone. 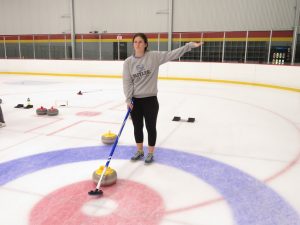 The skip, or captain of the team, stands at the other end.  They are in charge of telling the thrower where and how much to curl the stone.  They also tell the sweepers when to start sweeping the ice depending on the speed of the stone.

Points are scored at the conclusion of each round, after all eight stones are thrown.  The team with the stone closest to the button (the center of the target) wins that round.  The winning team is awarded one point for each of its stones lying closer to the button than their opponent’s closest stone.