The hockey team traveled up to Wisconsin on Friday to face Marquette University, who is ranked 3rd in the Pacific Region of the ACHA. 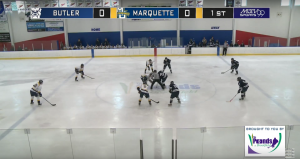 On Friday night, it was all Marquette, who won by a score of 9-0.

Marquette University had a six-goal lead after two periods and cruised the rest of the way en route to a 9-0 win over Butler University.

Corey Quinn had one goal and three assists to lead Marquette. Quinn scored 6:35 into the third period to make the score 8-0Marquette. Christian Leathley provided the assist.

Others who scored for Marquette included Adam Benkovich, Marc Shipbaugh, and William Podewils, who each put in two and Brian Kennedy and Christopher Dolan, who scored one goal each. More assists for Marquette University came via Eric Plotz, who had two and Joe Bertane, Lee Barnes, Mitchell Ellena, Colin Telmanik, Johnny Stillman, and Christopher Morrow, who each chipped in one.

Butler University was held below its usual level of production, who normally averages 4.3 goals per game.

Saturday night was a little bit different, as the game was tied 1-1 after 2 periods. However, the Golden Eagles won it in the 3rd to end Butler’s inaugural season.

Sophomore forward Patrick Connelly found the back of the net just 1:30 into the first period to give the Dawgs a 1-0 lead over the Golden Eagles. Butler held that lead until 10 minutes later when Marquette defensmen Eric Plotz fired a shot from the point to beat Junior goaltender Sean O’Reilly. 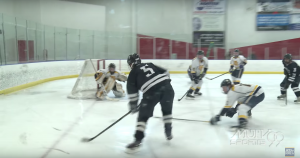 Patrick Connelly fires a shot past Marquette’s netminder to put the Dawgs up 1-0 (Marquette University Television).

The 2nd period was held scoreless, but housed many close scoring opportunities from the Dawgs, including 1 controversial goal that was called off.

In the 3rd period, the floodgates opened and Marquette netted 5 more, which concluded the game at 6-1.

The broad cast of the game can be found here.