Bulldog hockey returned to action on Thursday, January 21st against in-state rival Indiana University. Sophomore transfer goaltender Jack Sigman played in his first career game for the dawgs against IU. The team matched IU’s pace and trailed 1-0 in the first period when sophomore Eric Gentry opened up the scoring for the bulldogs with a shot from the point on a powerplay to tie the game up early on. Brayton and Kortebein assisted the goal. IU scored with three minutes left in the period to go up 2-1 heading into the second. The second period was scoreless until Kyle Kortebein fluttered in a rebound to tie the game up at 2-2 with 3 minutes left in the second period with assists from Gentry and Casey.

“Luckily the puck came back out and I was able to bury it,” Kortebein said, “I was able to scoop the puck over the goalies shoulder and make it count.” 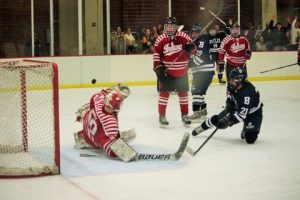 Butler Hockey’s Kyle Kortebein notches his second point of the night by scoring on a rebound to tie the game at 2 (Photo by James Longstreth).

The third period proved to be a hassle for the dawgs, who experienced injury from sophomore Noah Brayton early on. IU scored 4 unanswered to close out the match, with the shot total favoring IU, 40-31.

The following day, the team traveled up to south bend to play against Holy Cross college. Junior Matt Thornley started in net for the dawgs. The team skated to a 7-3 loss on Holy Cross’s senior night, but head coach Branden Bushelle was impressed by the team’s performance.

“I think we played a good game today, but had some let downs that costed us big time,” Bushelle added, “We out shot them and out played them in my opinion, but being down some bodies definitely took it’s toll in the later parts of the game.” 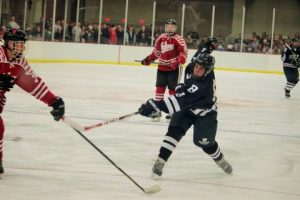 The Bulldogs played their 3rd game in 3 days with a short bench on Saturday, January 23rd against Davenport University. Butler was able to hold the game at 0-0 through 2 periods but ran out of gas in the third when the flood gates opened and Davenport ended the game on top 7-0. The dawgs resume play next weekend with 2 games against Ball State.