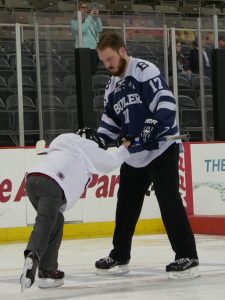 Indiana Hockey recently put on a “Try Hockey for Free” day  for Indianapolis kids focusing on putting kids on the ice in hockey equipment for the first time. They asked the Butler hockey team for help and four of our members — Eric Gentry, Jesse Longtin, Jack Becker, and Ryan Barrett — volunteered at the event as on-ice help. The event brought back some memories for the players.

“It was kinda full circle for me,” club president Jack Becker said. “I remember my dad giving me a bucket to push around the ice and letting me hold onto his hockey stick as I marched around the ice. And I got to do the same to the next generation of hockey players.”

INHockey.net reported that the camp had nearly 300 kids aged three to eight years old that came out to put on gear for the very first time. Even the select few who had skated before, still used the ice to learn some new skills from the older players.

“It just made me feel really fortunate for my dad helping me out so much by building a rink in our backyard,” sophomore forward Jesse Longtin said. “I was able to learn so much out there and having camps like these help so much in the progress for young and inexperienced players.”

The Butler hockey team hopes to help grow youth hockey in the area in an effort to create a new wave of Bulldogs.