This upcoming year brings hope to the club as we return to the sport we all love. Currently we are scheduled to visit Ball State on 11/20/2021 to go and win a tournament. As we near our 2022 Spring season we hope to travel the land of the Cacti, Phoenix, AZ. A lot of you may retire there, but not us, this is where we thrive. We were born to be volleyball players, even the vertically challenged. This is where we show them our abilities, nay our skills. We will succeed, we will prevail, we will win.

Have I mentioned…. WE ARE BACK.

Hello and welcome back everyone!

Simply providing a quick update on block party for the 2020-2021 season. Due to COVID-19 concerns the event has gone full online. We believe we have done everything we need to so that we are present in the online portion and easily accessible. With that being said we could have very easily missed a step that might not put us in touch with the maximum amount of players. That being said we are hoping this will serve as a secondary way for new players to get in touch.

We have a zoom meeting time from 11:30 to 2:00 tomorrow 8/29/20. That link is below. We will also use our Instagram page (@bumensclubvb) to keep people updated. Feel free to message us with any questions. The Butler Men’s Club Volleyball email is also a good place to reach us with any questions (mensvolleyballclub@butler.edu). Below is also a simple questionnaire to help the officers get in touch with new players.

We hope to interact with a lot of new players tomorrow, see you then!

Well that didn’t go as planned…Unfortunately due to the ever grumpy COVID-19 the season was cut short, too short. When all players left for spring break in early March we said our “see you later” assuming we would see them in a week or two, this would not be the case. Butler University moved to online schooling during spring break and the 2020 roster’s last words of “see you later” turned into “goodbyes” pretty quickly. Shortly thereafter the NCVF cancelled their annual national tournament that was scheduled to be hosted in Kansas City on Easter weekend. The club and all of its members are very sad to have their season cut short. Sometimes that is just how the cookie crumbles and instead of letting it get the best of us we look forward to next season and becoming better students and athletes as a result. With that being said we want to extend a huge thank you to our two seniors for their countless time they have spent with the club.

Brad Herzog- A swiss army knife of a player who was always ready to practice. Brad, better known by some as “baseball bat Brad”, was a student of the game for all four years of college volleyball. He learned a lot and grew as a player. Men’s Club Volleyball reaches out a big thank you to Brad for his commitment.

Johnny McDonald- The backbone of the team for the past few years Johnny will be next to impossible to replace. President of this club his sophomore year Johnny was vital in sending Butler to its first national tournament as well as mentoring incoming presidents for their terms. All-conference honoree a few times, “Johnald” will also be tough to replace on the court as well. Johnny has anchored the outside position for this club for plenty of years and even lived out his volleyball dream when he set for an entire tournament this year. Rumor has it he sent a mix-tape of his highlights coming in as a freshman, now that is dedication!!!! Johnny moves on to to take his CPA exams this summer and we are rooting for him as he has always rooted for us. We might miss most his countless miles on the red Toyota Rav-4 but I am sure we will find a new road trip vehicle. Below is a picture of Johnny, what a beautiful human! 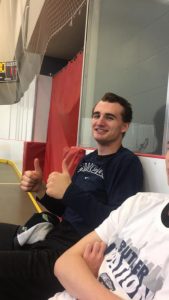 THANK YOU SENIORS AND BEST OF LUCK MOVING ON!

To wrap up this post I would like to welcome our new officers. I know with good faith that they are eager and excited to carry on the Butler Men’s Club Volleyball ways!

Welcome back, the Dawgs are excited to open the 2019-2020 season with our 3rd annual fall invitational. This year the Dawgs play host teams from around the area including Ball State and Indiana State. The tournament will take place October 12th in the HRC on both courts 1 and 2 starting at 9:00 a.m. We would love to see support from the BU community all day!!! The dawgs volleyball is restocking for the upcoming campaign; the road to Kansas City starts now!

Welcome back Bulldogs!!! With classes starting back up that means volleyball season is not too far behind. This year we have a lot of spots to fill with a large group of graduating players from the 2018-2019 season. We will miss the likes of graduating seniors and fifth years Robert Smith, John Lacheta, Johnathan Phoun, Randall Kelch, and former president Sam Burton (May he forever reign over the North). We do however return honorable mention all-conference star outside Johnny McDonald. New officers are eager to get back out on the court and cannot wait for tryouts this upcoming week. With that being said tryouts were originally scheduled for September 2nd and 4th. Due to slight oversight Monday, September 2nd is Labor Day and we are going to cancel that tryout and push the tryout to the following week. New schedule for tryouts will be:

We look forward to seeing all the players come and play!!